To share your memory on the wall of William Brown, sign in using one of the following options:

After encouragement from his wife, Bill eventually went back to school and earned his Masters in Fine Arts & Teaching from the Rochester Institute of Technology where he was hired on as staff after graduation and lead the Adult Education Program in the Arts. He was then offered a teaching position at North Texas University where he and his wife relocated to Denton, Texas for a few years before returning to the Rochester area to again teach at RIT in the late 60’s.

Bill and Judy adopted their only child, Heather, in 1972, and shortly after he was offered a position at Dutchess Community College where he and his family relocated to Hyde Park, NY for 4 years before once again returning to the Rochester area to teach at RIT. It wasn’t long before he was offered his final position to run the Art Program at Genesee Community College where he taught for 20 years (retiring in 1998). It was at GCC where he finally put down his roots and settled his family in Le Roy, NY.

Bill’s fondest memories were of his childhood in Geneseo, growing up at 16 Elm Street with his grandmother Mary Ryan Griffin and his only brother, the late John (Jack) M. Brown. He could reminisce for hours about their adventures and friendships. Even though he and his wife Judy were not able to have the 12 children they had always dreamed of (yes, 12!), he took immense pride in his grandchildren and thoroughly enjoyed helping raise them and watching them grow.

Calling hours will be from 4-7 p.m. on Sunday, December 29th at Cameron, Brady & Steuber Funeral Home, 111 Wolcott Street, Le Roy. A Funeral Mass will be held for Bill at Our Lady of Mercy, 44 Lake Street, Le Roy at 10 a.m. on Monday, December 30th, with caravan to St. Mary’s Cemetery in Geneseo immediately following. All are then invited to join us for a luncheon at The Big Tree Inn after the burial ceremony. In lieu of flowers, Bill would prefer a donation be made to St. Joseph Catholic School, 2 Summit Street, Batavia, NY 14020.
Read Less

Provide comfort for the family with a meaningful gesture of sympathy.

Show you care by sending Flowers

We encourage you to share your most beloved memories of William here, so that the family and other loved ones can always see it. You can upload cherished photographs, or share your favorite stories, and can even comment on those shared by others.

Posted Dec 29, 2019 at 11:07am
Bill Brown, my surrogate big brother, was a huge part of my happy childhood on Elm Street in Geneseo in the 1940s. Of all the kids on our street, the one that loomed largest in my memories was Bill Brown. And although I was six years younger than Bill, I was often down at 16 Elm Street where I have fond memories of Grandma Griffen, brother Jack, and sitting on the big front porch with Uncle Ed or Uncle John, the latter of whom taught me how to catch a bird by putting salt on his tail. (I remember going right home to ask my Mom for a salt shaker!) Bill and I shared a big laugh about that when ai last saw him a few months ago. We also talked about those summer evenings when all the neighborhood kids were racing from tree to shrub, traipsing through the neighbor's lawns, to the tune of an empty juice can being kicked down the street. I marveled that nobody complained about us, but Bill said, "they didn't because no matter their age, they all loved kids, and they knew we would not trample their flowers"; and then with a sly grin he added "and they knew we would all go home as soon as it was dark outside." Well, hey, we were talking about 1940's behavior standards. After my family's move away from Geneseo in 1950, I lost track of Bill, but never forgot him. We reestablished occasional contact a year or so before his wife's death. That was one of the best things I've ever done since returning to Western New York. Oddly, I have no sadness at Bill Brown's death. I just feel privileged that he had a presence in my early life and my later life.
Larry Henty
Dansville, NY
Formerly of 25 Elm Street
Comment Share
Share via: 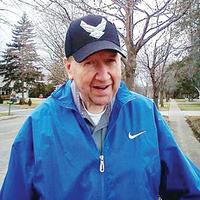 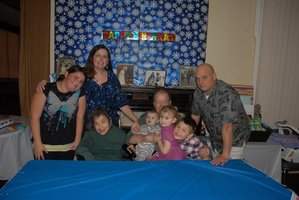