To share your memory on the wall of Walter Johnson, sign in using one of the following options:

SCOTTSVILLE - November 30, 2018 at age 88. He is survived by his loving wife, Shirley (Jones) Johnson. Walter and his wife were married a month shy of 70 years. Also survived by his sons, Daniel (Maria) Johnson o... Read More
Walter Rees Johnson, Jr.

Walter was predeceased by his sisters, Beverly Brunner, Sandrea Lukasiak. Walter was longtime member and Officer of Local 86 IBEW.

Family and friends are invited to call Friday 4-7 PM at the J. H. Cameron Funeral Home, 26 Rochester St., Scottsville. Saturday at 2 PM his Memorial Service will be held at Union Presbyterian Church, 1 Browns Ave., Scottsville. Private interment. In lieu of flowers, memorials may be made to a charity of your choice in Walter's memory.
Read Less

Provide comfort for the family with a meaningful gesture of sympathy.

Show you care by sending Flowers

We encourage you to share your most beloved memories of Walter here, so that the family and other loved ones can always see it. You can upload cherished photographs, or share your favorite stories, and can even comment on those shared by others. 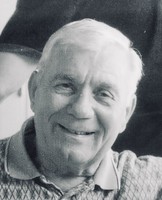